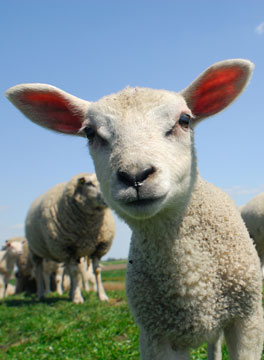 Johne’s in sheep is not as well publicised as it is in cattle – it does not cause the same tremendous watery diarrhoea in sheep as it does in cattle. Due to the insipid nature of the disease in sheep, and the methods of testing available, diagnosis is difficult and hence the disease is greatly underdiagnosed in the UK sheep industry.

What is Johne’s Disease?

Johne’s is considered an ‘iceberg disease’, meaning that the majority of infected sheep will show no clinical signs. In fact, for every  clinical case, there may be 10-15 sheep sub clinically affected. The causal bacterium, Mycobacterium avium subspecies paratuberculosis infects lambs early in life when they come into contact with the faeces of an affected sheep, or via the placenta, colostrum or milk of an affected ewe.

What are the signs?

The clinical signs of chronic weight loss, poor body condition and poor fleece do not become apparent until the sheep is around three to four years old, however, in the mean time the affected animal will have begun shedding the bacteria within the flock, known as a ‘carrier’ or ‘subclinical’ case. Over this time, ewes may be more susceptible  to worm and fluke burdens and can give birth to lambs with lower birth weights. As the disease progresses,  the bacteria causes massive thickening of the gut wall and, in sheep, leads to generalised ill-thrift in older ewes, often without any scour.

How to test for Johne’s Disease

Though there are multiple different tests for Johne’s, none of them are perfect. The best way to achieve a diagnosis is to perform post mortems on any animals showing clinical signs.  Johne’s is characterised by a marked thickening of the gut wall, though this will not show in subclinical animals, and it is a very final way to reach a diagnosis! Blood and faecal samples may also be tested however; the bacteria takes a long time to culture and blood samples have been shown to give a high number of false negatives, meaning that an animal that  is infected with Johne’s may go undiagnosed. There is no treatment for Johne’s and the disease is very difficult to eradicate, therefore preventing it entering your flock in the first place is vital.

Control of Johne’s can be through various methods. Culling of older, thin ewes on suspicion of Johne’s (or another ‘iceberg’ disease such as OPA) is a starting point. On top of this, we can utilise blood tests, and though they may not be the most sensitive tests, positive results should always be trusted. Management plays a massive role in the control of Johne’s in sheep flocks, by minimising exposure  e.g. cleaning lambing pens well, ensuring dry standing areas around clean water troughs etc. We now have access to a vaccination, which could be used in flocks with a known problem to reduce the issues caused.

Last month at our latest farmers’ evening, we heard from Eddie Scott about the Gudair vaccine and its role in both preventing and  controlling Johne’s disease within a flock. Research indicates that the Gudair vaccine can reduce the number of deaths due to Johne’s by 90%, and also reduce the amount of Johne’s causing bacteria excreted in sheep manure by 90%.

This article was taken from our October 2019 farm newsletter, it also includes a study on Tup Testing and important diary dates.