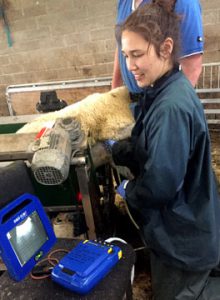 What is Ovine Pulmonary Adenocarcinoma?

Ovine Pulmonary Adenocarcinoma (OPA) is a contagious lung tumour caused by the Jaagsiekte Sheep Retrovirus (JSR). The disease presents itself with signs of wasting and  nasal discharge, progressing to respiratory distress as the tumours take up space in the lungs and secrete large volumes of fluid. Signs of OPA are most commonly seen in sheep of three to four years old and transmission occurs through the aerosol route as well as in colostrum and milk.

Most of us are familiar with the “Wheelbarrow Test” as a way of identifying sheep affected with OPA, whereby the sheep’s hindquarters are raised above its head, producing fluid from both nostrils. However, the test will not identify sheep in the early stages of OPA infection, and it has been shown that even in the advanced stages of the disease, one third of sheep affected by OPA will not produce any fluid. Welfare concerns have also been raised about this method of diagnosis, with sheep struggling to breathe and dying soon after the test is performed.

A new method of diagnosis

Animals affected with OPA do not produce an antibody response to the virus, ruling out many common methods of  detection, however, ultrasound scanning is becoming more commonly used to identify affected animals. Ultrasound screening to look for lung lesions means that the disease can be detected before clinical signs become apparent, enabling infected animals to be removed from the flock whilst still in reasonable body condition and still fit to travel, whilst also limiting transmission to other sheep. Scanning has been shown to detect tumours down to 2cm in size and at the same time can be used to rule out or treat any other lung pathologies that may be present.

This quick and easy technique alongside maintaining a closed flock or purchasing from OPA free sources, keeping animals in groups of similar ages, and good biosecurity could help reduce losses due to OPA on many farms.

This information has been taken from our November 2019 farm newsletter. This newsletter also contains information on respiratory disease in youngstock and a fluke alert.